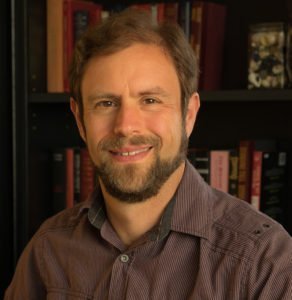 Langdon is a classically trained neuroscientist as well as a massage therapist and holistic health educator. He is the cofounder of Santa Cruz Neurofeedback Center.

Since 1989, Langdon has been using many of the techniques described on this website to effectively manage his own symptoms of Tourette’s Syndrome (as described in his personal account). He has worked with hundreds of children and adults to provide healing support for a wide variety of physical and psychological challenges.

Langdon began his formal education in the link between physiology and consciousness by training in massage therapy and holistic health education at the National Holistic Institute in Emeryville, California in 1989. In 1995, he received his BS in Biology from California State University at Hayward, and in 2000, he received his Master’s degree in Neuroscience from Brown University in Providence, Rhode Island.

During his final year in grad school, Langdon began developing the neuromassage system and opened a practice in Boston, Massachusetts. Neuromassage integrates massage with biofeedback, neurofeedback, and a variety of mind­body techniques to produce relief from chronic pain and anxiety.<

In 2004, he moved to Santa Cruz County and worked for two years supporting local doctors in the fields of pain management, physical medicine, and rehabilitation. In 2006, he cofounded Center for Transformational Neurophysiology (currently known as the Santa Cruz Neurofeedback Center, or The Center) in Soquel, CA, where he continues to expand his knowledge in areas such as yoga, somatic awareness techniques, interpersonal neurobiology, conscious dance, and ecopsychology, as well as learning about the latest bio/neurofeedback techniques and research.

Langdon doesn’t consider what he does to be a treatment for conditions. From his perspective as a neuroscientist, consciousness explorer and holistic healer, the medical model of diagnosis and treatment is not an accurate view of how people heal their nervous systems and expand their capacities. He teaches people how to use their nervous systems in as effective a manner as possible, and to shift their mindsets to be more in alignment with both the observable facts of their actual lives, and the deeper truths of their own existence. Once they learn the basic skills of self-awareness and nervous system optimization, symptoms of many conditions fall away. Once the nervous system has stabilized, it often becomes possible, with the support of their medical practitioners, to reduce or eliminate medication.

Since Langdon often works with people with serious mental health diagnoses, his work is overseen by a licensed psychotherapist, Aimee Pomerleau. This gives clients an extra sense of security, knowing that they are being supported by a team that holds them in both the safety and compassion of the psychotherapeutic model, and the expanded possibilities of life-optimization through mindfulness and neuroscience.